The 2020 County Championship got under way some four months late due to the Covid-19 lockdown at Ferndown Golf Club, with the course in superb condition. It was cold to start but we were promised a warm and sunny day which is what we got as the morning progressed. We had some 101 entries for the Championship and thanks to the club we managed to get 66 of those playing and the golf and course did not disappoint. The first round saw locals Justin Morris home in level par and Todd Sothcott in on one under par held the early club house lead.

Parkstone’s Oscar Hein took over at the top with a great two under 69 which held top spot until the final group came home and David Cook took over with a great three under par total.

So after a hearty lunch the players went out for the afternoon round and with the wind starting to get up it was going to prove a sterner challenge for the players to hold their nerve to make the final stages.

John Milne was round 10 shots better than his morning 80 with Ferndown Greg Towns having the best round of the afternoon with a great 2 under 69.  Oscar Hein came home in par to hold on to second spot from David Cook who with club team mate Adan Yates came home 1 under par.  For David it secured top spot and the Garrett Salver along with the Sika trophy for the best Mid-Amateur. Adan finished in third place overall.

Congratulations to David Cook on his 4 under total winning the Stroke Play and Garrett Salver. 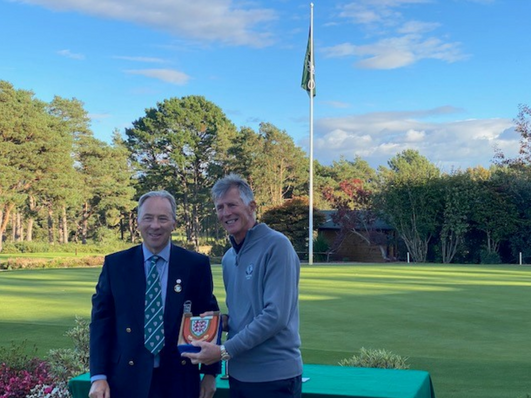 We then followed on with the next round and credit to all the players we got these matches completed just as the last bit of daylight disappeared.

The matches finally got under way at Mid-day on the Friday with a break in the weather and the matches going as follows: